Overwatch took the gaming world by storm when it launched in 2016, thanks to its well-balanced roster of unique heroes and terrific objective-based, first-person-shooting gameplay. The game’s popularity endured through the years thanks to a wealth of new content like characters, maps, cosmetics, and game modes, adding to the terrific foundation. However, once the content dried up for Overwatch, the public interest followed shortly afterward. Overwatch 2 represents the re-emergence of one of the top multiplayer games of the last generation, delivering a 5v5 format, a free-to-play structure, and a ton of new content. The result is an action-packed and enjoyable progression of the beloved hero-shooter franchise, but one that feels less revolutionary and more iterative than expected.

The core gameplay feels simultaneously familiar and fresh. Capturing an objective with a coordinated assault or activating your Ultimate during a crucial last-second push to secure the victory is just as breathtakingly exciting as ever. The ways the heroes interact with each other – both in gameplay and personality – create watercooler moments I imagine I’ll bring up with my fellow players for years to come. The mechanics and match flow remain mostly intact, but developer Blizzard implemented various changes to the core formula to deliver something that changes how battles play out. 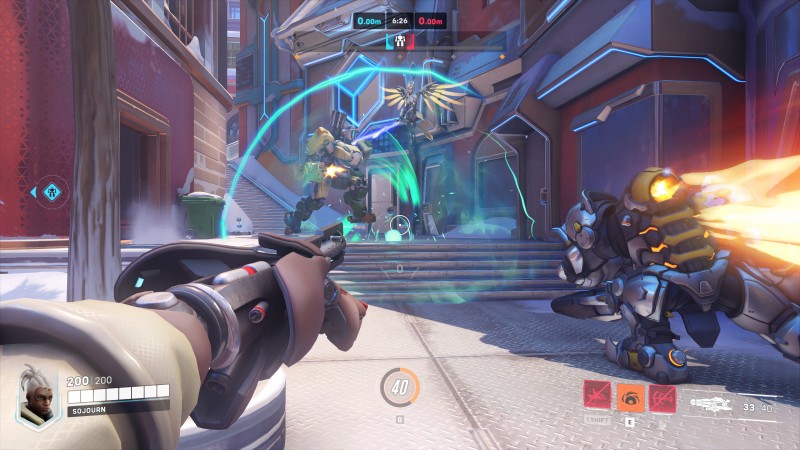 The new 5v5 format is perhaps the most significant change in Overwatch. Now, traditional team comps drop to one tank, making its role as a damage sponge and utility player more critical than ever. With Doomfist now a tank and Orisa reworked to be more offense-minded, you now have a broader range to choose from in the category. Outside of tank play, this 5v5 format opens the door for faster-paced blitzes and ensures that every player carries more importance in each match. This shift is particularly evident in Push, the new game mode where players escort a robot to the other team’s spawn point. This mode is fast-paced and can swing the other way quickly, playing perfectly into the new 5v5 format.

When you first jump into Overwatch 2, you can expect a ton of new content right out of the gate: three heroes, six maps, a game mode, and more than 30 skins. The new heroes and maps are stellar additions to the preexisting lineups; Junker Queen and Sojourn are formidable in battle, but Kiriko, with her substantial healing and buffing capabilities and deadly kunai attack, is one of my favorite support heroes to date. When you combine these new characters with the reworks of longtime favorites like Orisa, Doomfist, Zarya, and Bastion, the roster feels refreshed, and the meta flipped on its head.

Whenever a formerly premium title becomes free-to-play, players are rightfully wary, thanks to predatory monetization schemes that permeate the category. While players should still approach Overwatch 2’s shift to free-to-play with caution, Blizzard keeps the paywall-locked content cosmetic. The best part is that players no longer must cross their fingers for anything but duplicate cosmetics in their loot boxes.

Now, loot boxes are replaced by an in-game shop and Battle Pass, which progresses by completing in-game challenges. These objectives range from winning a game playing as a healer to using a specific character’s Ultimate three times; some challenges refresh daily, others weekly, and others on a seasonal basis, ensuring you always have new goals towards which to strive. Each time you complete a challenge, you gain experience towards the next tier.

Progress accumulates steadily regardless of if you pay the $10 (or the equivalent of in-game coins) for the boosted premium Battle Pass. However, it’s disappointing that you need to reach level 55 of the free Battle Pass to unlock that season’s new hero; if you purchase premium, the hero joins your roster at level 1. The rest of the rewards are cosmetic, but with so many exclusive to the premium pass, non-paying players may find limited satisfaction from this new structure. And with seasons lasting nine weeks, those who buy each premium Battle Pass at $10 will eclipse the $60 MSRP of the original Overwatch in just over a year.

While I’m certainly wary of this new system going forward, for now, the structure seems like a reasonable alternative to the previous framework. Thanks to a sneak peek of the content on the horizon, Blizzard has impressive plans for its resurgent hero shooter, and I like the existing challenge system. However, I most appreciate the intentionality in unlocking rewards, which starkly contrasts Overwatch 1’s loot box system.

Those who never played the first Overwatch have additional hurdles, like needing to unlock the original heroes by playing a set number of matches. Blizzard bills this as a way to fend off cheaters since it’s now free to start a new account. But it ultimately feels like punishment for not paying the price for the first game. The silver lining is that this drip-feed approach could onboard new players without overwhelming them with many characters to learn. However, requiring players to complete up to 130 matches to unlock the full roster feels steep. Thankfully, wins count double towards that number, and you can use the original heroes in custom games. Plus, if you enjoy Overwatch 2’s moment-to-moment gameplay as much as I do, those unlock requirements fly by. Still, I’m glad I didn’t have to complete them as a returning player.

Overwatch 2 doesn’t flip the formula the way you might expect a long-awaited, numbered sequel would. But through various clever tweaks, it’s a well-rounded evolution of the experience into which I’ve poured more than a thousand hours since 2016. I may never recreate the magic of those first few years in Overwatch, but Overwatch 2 is a big step towards restoring the faith in the franchise and has me thinking it’s time to pour a few more hundred hours into my favorite team-based shooter.