Kimberly May Be My New Main In Street Fighter 6


Tokyo Game Show provided an opportunity to try out the latest build of Street Fighter 6. Although Capcom just pulled the curtain back on the next batch of fighters to join the roster, my demo included the first playable sessions for the last trio of reveals: Guile, Juri, and newcomer Kimberly. Since Kimberly was the wildcard of that bunch, I opted to spend most of my hands-on time discovering what she brings to the table. After only a few rounds, I had a tough time wanting to switch to anyone else.

If you haven’t been keeping up, Kimberly is a ninja pupil of Guy who adores the ‘80s and graffiti. She incorporates the latter interest into her acrobatic offense, such as throwing exploding spray cans like they’re shurikens. That’s silly and fantastic. She’s also set to play a pivotal role in the plot. I spoke to Street Fighter 6 director Takayuki Nakayama and producer Shuhei Matsumoto who told me that Kimberly, Luke, and Jamie act as the game’s main faces to compliment the old guard of Ryu, Ken, and Chun-Li.  Luke is the star, Jamie brings a technical game, and Kimberly emphasizes speed.

Given Kimberly’s apparent importance, it’s good to know she’s a blast to use. Kimberly’s swiftness allows her to quickly close gaps with attacks that rush opponents. I loved executing her running step-up kick, where she walks on and then kicks off an opponent’s face, flipping backward to immediately create distance again. Or you can follow this move up with an over-the-top powerbomb. Speaking of cool wrestling moves, Kimberly can cave faces in with a rushing superman punch of sorts that she can chain into a grapple takedown. 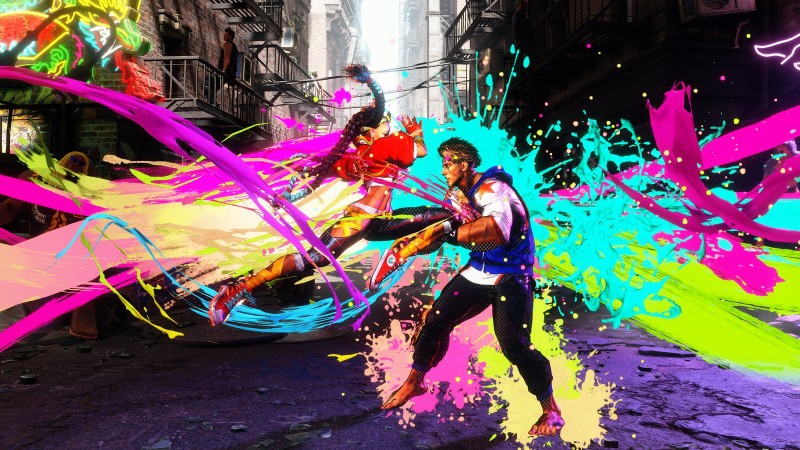 Her Hidden Variable attack stands as one of my favorite tricks. This essentially acts as a smokescreen teleport as Kimberly drops an exploding spray can like a smoke bomb to create a “surprise” ambush. I enjoyed using this to disorient my opponent and chaining it with moves that push Kimberly away, allowing me to immediately regain ground. Plus, the vibrant clouds just look cool, even if inhaling in all of that paint should knock Kimberly out faster than any punch could.

I also dig what I can only describe as Kimberly’s take on Ryu/Ken’s famous hurricane kick. The only real difference is that she ascends vertically instead of spinning across the screen, making it great for punishing adversaries who get too close, negating aerial attacks, and launching opponents in mid-air. This move can be executed mid-jump, and nailing it feels immensely satisfying. That about sums up Kimberly as a whole. She has an entertaining and playful style that meshes well with the existing roster.

A demo isn’t enough time to master all of Kimberly’s intricacies, but she’s another stand-out rookie in a game that’s doing well in that respect. She’s the most fun I’ve had playing a combatant in Street Fighter 6 so far as someone who favors speedier, agile characters. I can’t wait to get to know Kimberly better when the game launches next year.

Can Natural Stress Relief Pills Assist Me With My Anxiety?