Nearly four years after its reveal, Bayonetta 3 is finally on the horizon and graces Game Informer’s cover this month. Platinum Games’ long-awaited threequel doesn’t rest on the laurels of its beloved predecessors. Gaming’s favorite witch has new tricks up her sleeves in the forms of Demon Masquerade and Demon Slave, letting players utilize their demonic minions in combat in new, kaiju-sized ways. If one Bayonetta wasn’t enough, a multiversal storyline introduces several variants that bring their unique brands of flair. At the center of this crisis stands newcomer Viola, the second playable character and rookie Umbra Witch, who serves as a mysterious key to the game’s events.

We took a trip to Nintendo of America headquarters to play Bayonetta 3, tearing through portions of the opening hours as Bayonetta and Viola. In addition to sharing our hands-on impressions, I interviewed Platinum Games’ top brass via email, including game director Yusuke Miyata and supervising director Hideki Kamiya, to get the skinny on Bayonetta 3’s long development and answers to the burning questions surrounding its gameplay and story. Our beautiful cover art features Bayonetta flaunting her Demon Masquerade ability by channeling the power of Madama Butterfly, who appears on the back cover in her full, demonic glory. 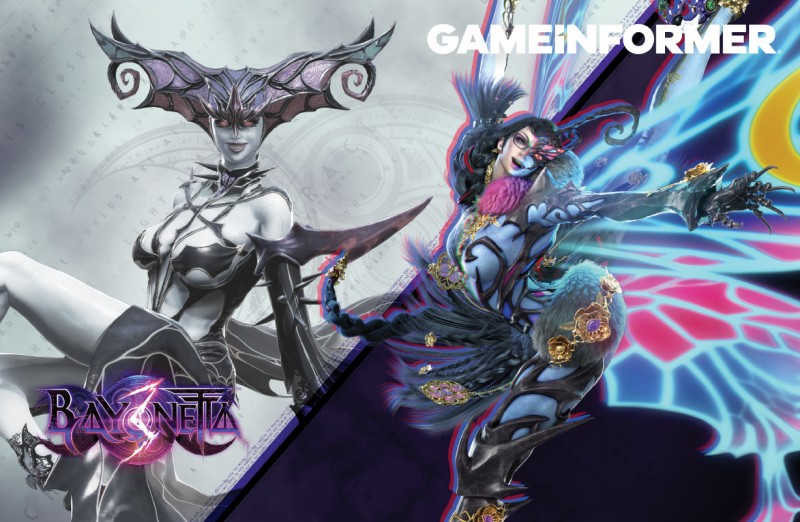 As usual, we also have a Game Informer Gold version of the issue. Limited to a numbered print run per issue, this premium version of Game Informer isn’t available for sale. To learn about places where you might be able to get a copy, check out our official Twitter, Facebook, and Instagram, and stay tuned for more details in the coming weeks. Click here to read more about Game Informer Gold.

Print subscribers can expect their issues to arrive in the coming weeks. The digital edition of this issue launches later today for PC/Mac, iOS, and Google Play. To subscribe to either the digital or print version, click here. Be sure to keep an eye on our coverage hub for online features over the coming weeks by clicking the banner below.